Dietlikon, 10 February 2020 – Implenia and Berliner Verkehrsbetriebe (BVG), builder and client respectively, celebrated the completion of shell construction for the Museumsinsel station on the city’s new U-Bahn line number 5 today. The ceremony was held in front of the Humboldt Forum in the Berlin Palace in the presence of City Mayor Michael Müller and around 160 guests.

Michael Müller praised the performance of all the different organisations involved in the project: “I feel nothing but deep respect for the completion of the shell construction for this challenging underground railway station in the middle of Berlin, right next to Museumsinsel. It marks a major step on the way towards the opening of the line at the end of this year.” Henning Schrewe, Managing Director of Implenia Construction GmbH, added: “I’m very pleased that this technically difficult construction job has allowed Implenia to prove once again our skill and ability to collaborate across different disciplines. Our tunnelling, special foundations and civil engineering units worked hand-in-hand on this project. Its success is also due to the consistently constructive, solution-oriented relationship with BVG and BVG Projekt GmbH, which led the whole project. Without them, a building project of this scale right in the middle of the city would have been virtually impossible.”

The Museumsinsel station was designed by renowned Swiss architect Max Dudler, who was inspired by the idea of “eternal night” – the lack of natural light below ground. Using a bright ultramarine blue and 6,662 points of light, the U-Bahn station will in future sparkle like a starry sky.

Implenia still has various remedial measures to complete by October 2020, including restoring the banks of the Spree Canal. There is also extensive road-mending work to do before the new U-Bahn line and the two stations “Rotes Rathaus” and “Unter den Linden” become operational at the end of the year. The Museumsinsel station is scheduled to open in summer 2021.

The “Lückenschluss U5” project (“Lückenschluss” means “closing the gap”) is one of Berlin's biggest infrastructure projects. It includes extending the existing U-Bahn line 5 from Alexanderplatz to the Brandenburg Gate, with three new underground stations and a connection to the existing line U55. Museumsinsel station lies directly beneath the Spree Canal and two listed structures: Schlossbrücke and the Bertelsmann Building. This part of the project is therefore technically very demanding.

Once the “Bärlinde” tunnel boring machine had done its work, Implenia’s special foundations experts had to freeze 28,000 cubic metres of subsoil between the Humboldt Forum and the Kronprinzenpalais. Work to dig out the platform area around the tunnel bores could only proceed when this ice shield was in place to prevent the intrusion of ground water. This was the largest amount of ground ever artificially frozen in any European city.

Implenia’s contract also included the construction of two parallel bores, each 1.7 kilometres long, a track-switching system and the shell construction of two stations, Unter den Linden and Museumsinsel. Specialists from Implenia’s civil engineering, special foundations and tunnelling units worked closely together on the job. “With this hybrid project, our client benefits from the comprehensive cross-disciplinary expertise of our specialists”, says Peter Hoppe, Project Manager at Implenia. 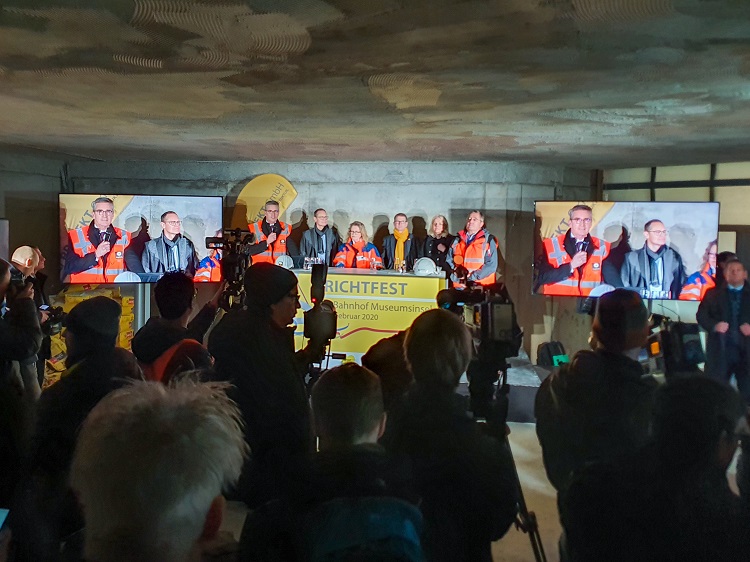 Implenia is Switzerland’s leading construction and construction services company. It also has strong positions in the German, French, Austrian, Swedish and Norwegian infrastructure markets, as well as significant building construction and civil engineering operations in Germany and Austria. Established in 2006, Implenia can look back on around 150 years of construction tradition. It brings the expertise of its highly skilled construction units together under the roof of a company active throughout Europe. With the broad offering of Implenia and the deep experience of its specialists, the Group can manage a building project through its entire lifecycle and deliver work that is economical, integrated and customer-centric. The focus is on striking a sustainable balance between financial success and social and environmental responsibility. Implenia, with its headquarters in Dietlikon near Zurich, employs more than 10,000 people in Europe and posted revenue of around CHF 4.4 billion in 2018. The company is listed on the SIX Swiss Exchange (IMPN, CH0023868554).