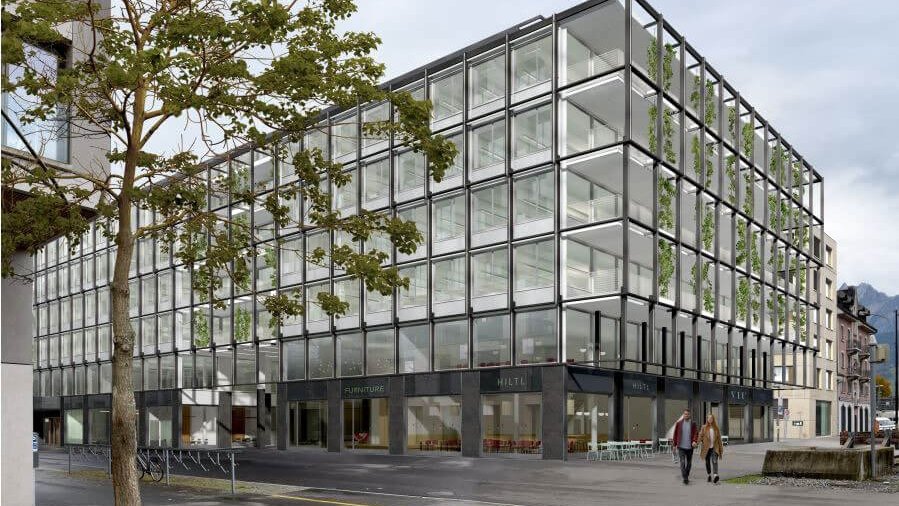 Glattpark (Opfikon), 16 November 2022 – Implenia’s Division Buildings has received an order from SBB Immobilien to build an office and commercial building on the Rösslimatt site close to Lucerne railway station. The company is also building a new children’s hospital/women’s clinic for Lucerne Cantonal Hospital (LUKS). In addition, Implenia has won four new modernisation projects in the German and French-speaking parts of Switzerland; modernisation work is becoming increasingly important for Division Buildings.

Rösslimatt, Lucerne – office and commercial property
As part of the development of the Rösslimatt neighbourhood in Lucerne, Implenia is building an office and commercial property for SBB Immobilien just next to Lucerne railway station, with space for around 1,000 employees as well as a wide range of retail and restaurant outlets on the ground floor. Implenia has been commissioned as total contractor to carry out the basic construction. The Rösslimatt site is being developed sustainably and to high quality standards: as well as certification as a 2000-Watt site, the building will be built to the DGNB silver standard. The project, worth over CHF 50 million, started in September 2022 and will take a good two years to complete. The Lean Construction method is being used for the execution phase.

Lucerne Cantonal Hospital – new children’s hospital/women’s clinic
Implenia has been awarded the contract to build the new children’s hospital/women’s clinic at Lucerne Cantonal Hospital (LUKS). Health sector construction projects are a strategic focus for Implenia’s Division Buildings. Work on the project, worth CHF 40.8 million, began in August 2022 and will continue until mid-2024. The new building will facilitate the further development of paediatric medicine (paediatrics and paediatric surgery), as well as of obstetrics and gynaecology at the highest level. It marks an important step forward for healthcare provision in Central Switzerland as a whole.
The building will be operated sustainably thanks to the Minergie-P-ECO building standard, a power grid based on an energy bank under the new building (270 geothermal probes) and a large-scale photovoltaic system on the roof. The project is being planned and executed with BIM (Building Information Modelling).

Modernisation projects in the German and French-speaking parts of Switzerland – energy-efficient renovation and conversion becoming increasingly important
Switzerland has a high proportion of old properties, some of which have protected status. They have to be adapted to modern requirements and updated to be more energy-efficient. Jens Vollmar, Head Division Buildings at Implenia: “The preservation and protection of buildings is a high priority in Switzerland. However, these buildings still have to be used and operated economically and sustainably. With its strong focus on sustainability, Implenia brings long experience and comprehensive skills to the job of renovating existing buildings in accordance with customer requirements.”

Implenia has recently won four large, complex modernisation projects in the German and French-speaking parts of Switzerland. It has been asked to renovate the listed Draisine Hall (formerly the Swiss Locomotive and Machinery Factory), including kindergarten and primary school, at the Lokstadt site in Winterthur. The project, commissioned by owner Ina Invest, includes master builder work and wooden construction. On Dornacherstrasse in Basel, Division Buildings is renovating an occupied residential apartment building on behalf of a large Swiss bank. In Cugy (Canton Vaud) Implenia has been commissioned by the same bank to undertake comprehensive renovation of a large development in line with Minergie standards. Implenia is also modernising three occupied residential apartment buildings on Rue de Beaumont in Geneva on behalf of two real estate companies. These four modernisation contracts are worth over CHF 55 million in total.

As Switzerland’s leading construction and real estate service provider, Implenia develops and builds homes, workplaces and infrastructure for future generations in Switzerland and Germany. It also offers tunnelling and related infrastructure projects in further markets. Formed in 2006, the company can look back on around 150 years of construction tradition. The company brings together the know-how of its highly skilled development, planning and execution units under the umbrella of an integrated leading multinational construction and real estate service provider. With its broad offering and the expertise of its specialists, the Group realises large, complex projects and provides client-centric support across the entire life cycle of a building or structure. It focuses on client needs and on striking a sustainable balance between commercial success and social and environmental responsibility. Implenia, with its headquarters in Opfikon near Zurich, employs more than 7,700 people across Europe and posted revenue of CHF 3.8 billion in 2021. The company is listed on the SIX Swiss Exchange (IMPN, CH0023868554). More information can be found at implenia.com.