Dietlikon, 6 July 2018 – FEDRO, the Swiss Federal Roads Office, has commissioned the EHS consortium to complete the basic build for a structure to enclose the A1 motorway in Schwamendingen. Implenia has the technical lead in the consortium, and the whole contract is worth roughly CHF 200 million. The 20-day appeal period for the award of the main construction lot has elapsed without objections. Implenia has an approximately 30% stake in the consortium, giving it a share of the contract worth around CHF 55 million.

The consortium consists of four partners: Marti Bauunternehmung AG, Walo Bertschinger AG, Anliker AG and Implenia. The main lot includes services for the basic build including foundation engineering, earthworks, surfacing, concreting, repairs and cabling. The consortium has already used Building Information Modeling (BIM) for the submission phase. It will also use BIM during the execution of the project, which will be a first for Swiss infrastructure construction. Building work begins in spring 2019 and will last until 2024. Using the cut-and-cover method, the consortium is enclosing the motorway where it enters the city at Zurich Nord.

This enclosure of national road N01/40 for around a kilometre between the Aubrugg motorway junction and the Schöneich tunnel will create a 30-metre wide structure that is unique in Switzerland. A public park – the Ueberlandpark – will be created on the roof of the structure, which local people will be able to access by ramp, stair and lift. This future recreation zone will help to reconnect a neighbourhood that was previously split by the road, and generally improve residents’ quality of life. The housing will eliminate virtually all the problems created by the motorway, such as noise and pollution. FEDRO is funding the pioneering project together with the canton and the city of Zurich.

For Implenia, this is a major infrastructure contract for its road building and civil engineering business. “We are very pleased to have won this contract together with our consortium partners,” says André Métral, Head of Implenia’s Business Unit Construction Switzerland. “It is further evidence of Implenia Group’s recognised expertise in infrastructure construction.” 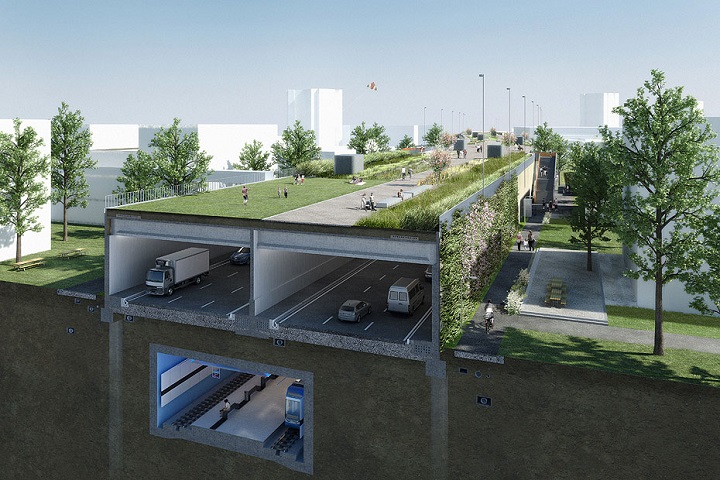 Implenia is Switzerland’s leading construction and construction services company. It also has strong positions in the German, Austrian and Scandinavian infrastructure markets. Established in 2006, Implenia can look back on around 150 years of construction tradition. It brings the expertise of its highly skilled construction units together under the roof of a company active throughout Europe. With its integrated business model and specialists operating in all areas of construction, the Group can manage a building project through its entire lifecycle and deliver work that is economical, integrated and customer-centric. The focus is on striking a sustainable balance between financial success and social and environmental responsibility.

Implenia, with its headquarters in Dietlikon near Zurich, employs around 10,000 people throughout Europe and posted revenue of around CHF 3.9 billion in 2017. The company is listed on the SIX Swiss Exchange (IMPN, CH0023868554). More information can be found at www.implenia.com.