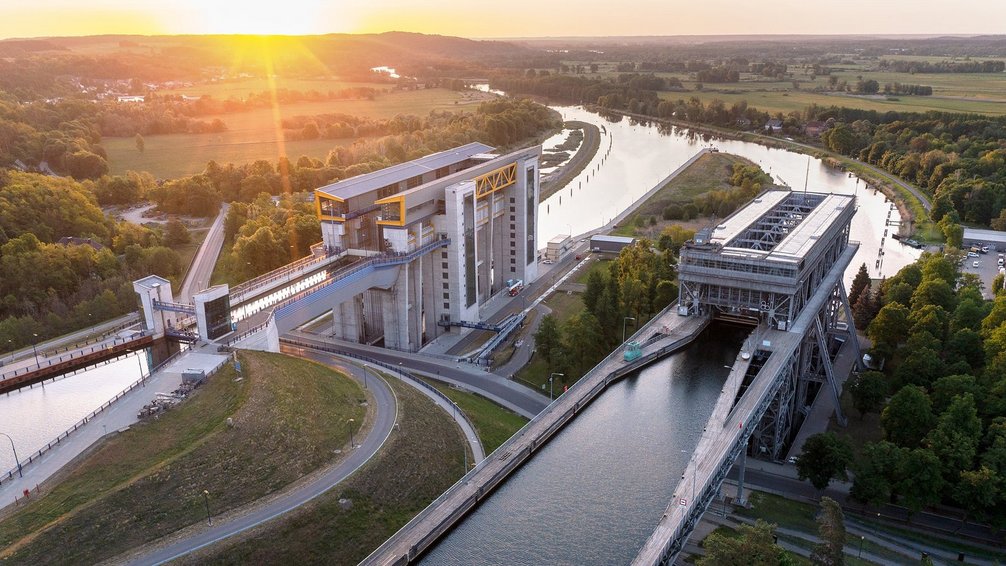 After a long and intensive construction period, the new Niederfinow Boat Lift on the Havel-Oder Canal in Brandenburg went into operation on 4 October 2022. It allows passenger and cargo ships to overcome the 36 m change in elevation by means of a suspended steel trough and state-of-the-art technology. The impressive construction was built by a joint venture under the technical guidance of Implenia.

The system in Niederfinow resembles a giant elevator. In the new boat lift, ships of up to 110 m in length are lifted and lowered in order to overcome the 36 metre change in elevation in the Havel-Oder Canal. Compared to the old system (built in 1934 and still in place to this day), the new lifting station enables much larger ships to pass through the canal on the waterway between Berlin and the seaport of Szczecin in Poland. At 55 m high, 46 m wide and 133 m long, the structure’s dimensions are impressive.

This work of German engineering was built for the Federal Waterways and Shipping Administration (WSV), under the technical leadership of Implenia, as part of a joint venture with partners DSD Brückenbau, Jh. Bunte and SIEMAG TECBERG. A total of around 65,000 m³ of concrete and reinforced concrete, 8,900 tonnes of reinforcing steel and 40,000 m³ sheet pile steel were used in the construction. “It was an extremely demanding project of gigantic proportions. One particular challenge was bringing together the plans developed by the individual trades to form a complex overall system with extremely tight manufacturing tolerances”, explained Henning Schrewe, Head Civil Germany at Implenia, as the project came to a conclusion. “The cooperation between all of the parties involved was essential to the success of the project. We are all very proud to have been able to hand this impressive building over to the company.”

Equipped with digital technology, the modern ship lifting system is completely electronically controlled and promotes the climate-friendly transport of people and, in particular, goods, on the waterways. The construction makes a significant contribution to environmental protection, as the loading capacity of an inland waterway vessel corresponds to that of up to 200 lorries. The Havel-Oder Canal plays a particularly important role for heavy goods transport between Western and Eastern Europe. The new lift not only transports cargo ships, but also passenger ships and motor boats. A journey takes around three minutes.