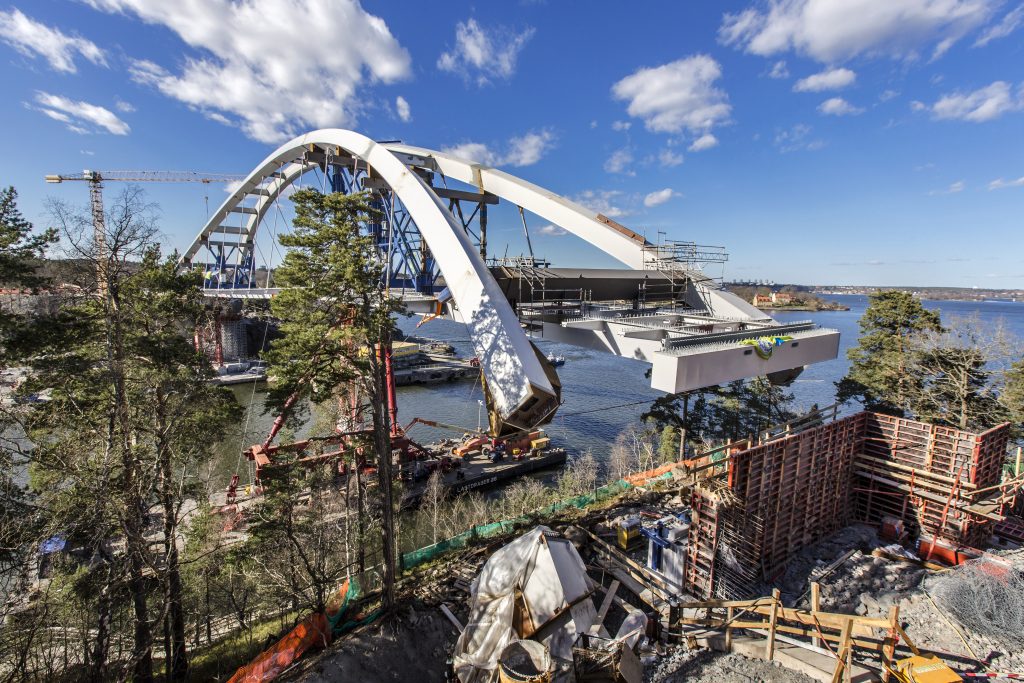 Kvarnholmen is an island in the Stockholm Archipelago that was used industrially. The former industrial area has now been developed into a vibrant urban environment.

A residential development has been formed and has transformed the island into a new area close to Stockholm city centre. By 2022, it is planned that 300,000 sqm will be developed for housing and employment. The bridge will be built over Svindersviken in a first phase to ensure accessibility and create a direct link to Nacka Municipality. Building an interchange with the nearby motorway on Värmdö is planned as a separate project, at a later stage.

Implenia Sverige AB, then Bilfinger Construction GmbH, won the tender with its proposal for an asymmetrical arch bridge consisting of a 145 m steel arch that transitions to a 48 m prestressed concrete bridge. The bridge span is gently curved looking from the top of the bridge. This leads to a remarkable solution in the geometry of the main arch beams which have a dynamic slope to the centre of the curve to then compensate for the effects of the forces. Each arch beam has its own angle of inclination and radius to optimise the forces in the structure. The superstructure consists of a co-located structure where the steel structure forms the structural basis of the concrete carriageway slab.

The connection of the bridge to the mainland was also part of the project. It is a 260 m long rock tunnel and a 46 m long connecting concrete tunnel in an open pit. A separate 44 m long girder bridge was built on a separate route for pedestrians and cyclists. There are also various concrete retaining walls and about 1 km of road construction with water pipes and electrical installations. The design was handled internally by the technical office in Germany and in coordination with the bridge designer LAP-consult