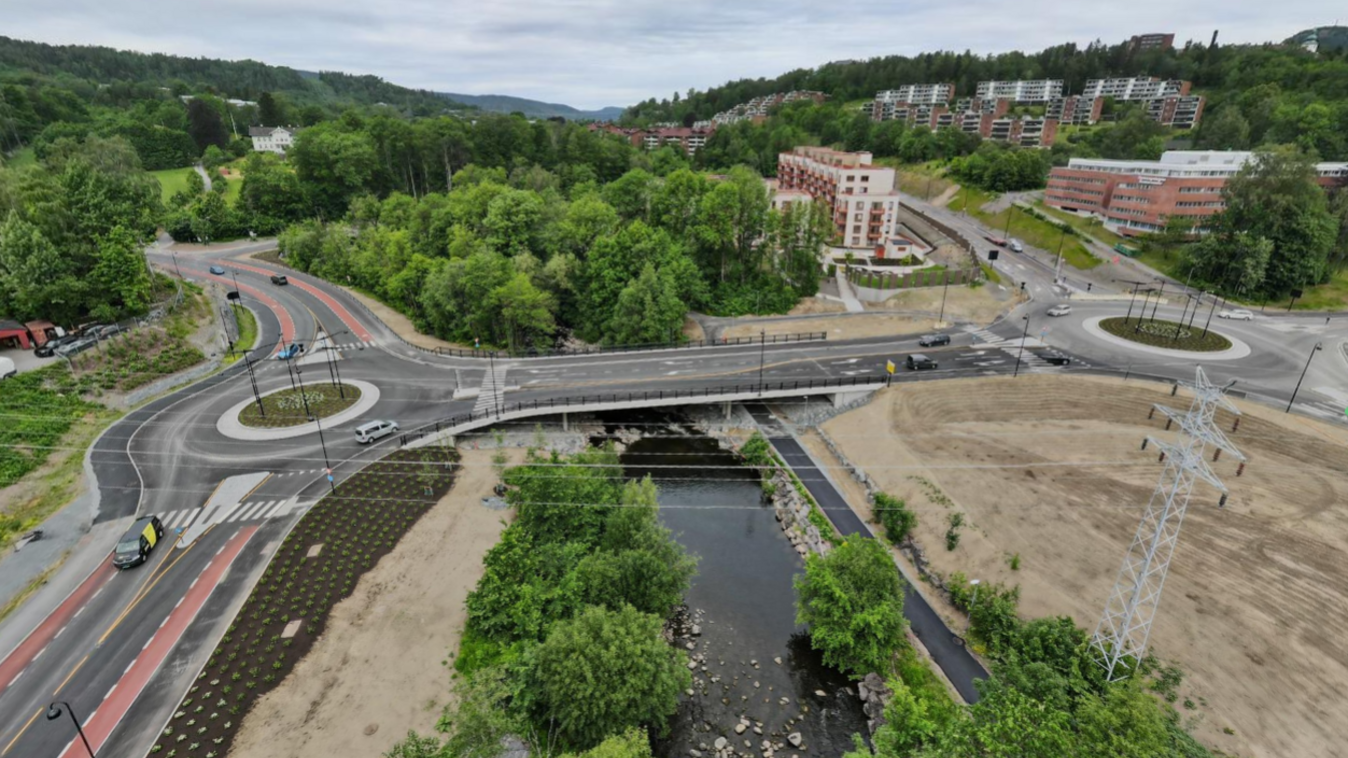 E03 Sandvika - Emma Hjort is a renewal of the section between Sandvika and Emma Hjort. The project is divided into three different sections; Sandvika, Hamang Nord and crossing at Åses vei. Sandvikselva is a protected watercourse that runs through the entire construction area. The work under the contract included demolition and restructuring of the existing road network, including several large structures, establishment of green areas, restructuring of infrastructure and construction of a new road network with associated structures and infrastructure. The works were carried out in a very busy area that required a high level of careful traffic logistics in all phases of the project.

Road construction The project included road construction for the main road and the pedestrian and bicycle path with the associated new water and sewage system, the OV system and the cable system with a total length of approx. 2 km. Work on securing traffic logistics was carried out in many phases. The excavation work was carried out near the city center with a lot of outside traffic (cars, pedestrians and bicycles), which required an additional focus on HSE and logistics. There were a number of challenges with the old infrastructure that had not been mapped, but with good and continuous dialogue with the client, this was resolved during the project.

Text boxThe Bjørnegård Bridge is a reinforced concrete deck bridge built on concrete supports. The bridge is 63 m long and 50.5 m wide with three lanes and walkways on both sides. 16 traction cables with a total length of 750 meters are used. The casting of the bridge deck (1150 m3 of concrete and 214 tons of reinforcing steel) had to be done in one process, 14 men worked continuously for 16 hours to do it. There are 4 axes and all are grounded directly on mountains with rock anchors as anchorage.

The Text BoxBirkheim GS is a single span steel arch bridge. The bridge is 33 m long and 5 m wide. A complete steel bridge was raised on foundations. Axis 1 was based on existing land piles with reinforced reinforcing bolts as anchorage. Axis 2 was converted from steel core piles to foundations on the ground. It was a very heavy lift to place 50 tons of steel bridge and was to the limit of what was possible with a crane. Prior to this, there was a strong focus on planning the best possible site. Working with the developer's geotechnical techniques, calculations were made to determine what forces "crane feet" would exert on the terrain at the proposed location. Furthermore, it was considered which measures to take to secure these forces (e.g. mass replacement, filling of good pressure masses, filling of masses on the outside of the crane, etc.).

Both bridges were executed over Sandvikselva. Sandvikselva is very sensitive to precipitation with periodic high water removal and large flows. Variation from 0.8 m3 per second to 70-80 m3 per second. During the works, careful monitoring had to be carried out to secure the works. Barriers were created in addition to pumping when the water volume was highest. At times when the water gap was too large, the work had to be stopped.