The new Aare bridge is being built 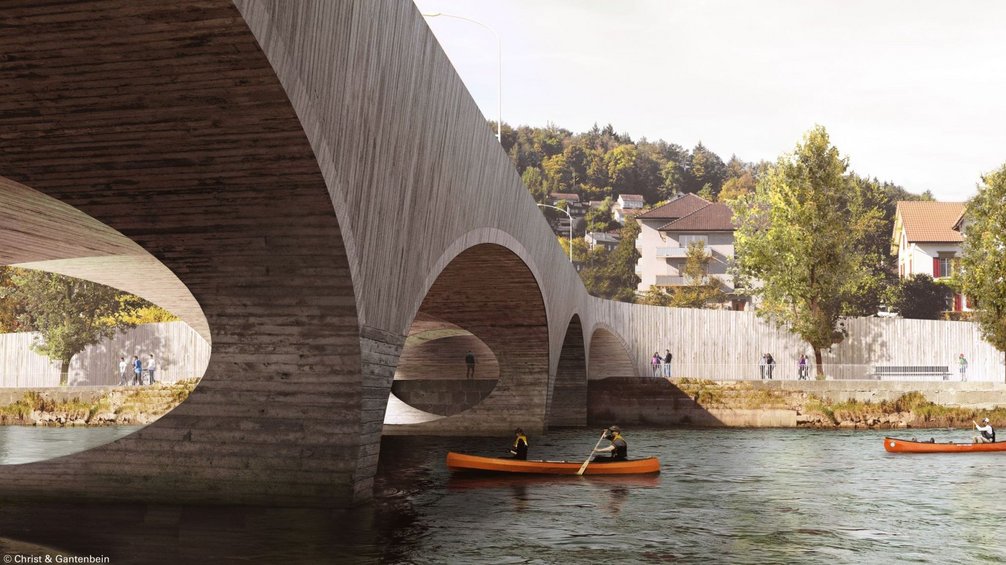 A special structure is currently being built in Aarau: the new Aare bridge with the project name Pont Neuf, also known as the Chain Bridge. From 1850 to 1949, the former chain bridge adorned the cityscape of Aarau and connected the old town on the south side with the Scheibenschachen district on the north side. And although it was replaced by a simple concrete bridge in 1949 due to impairments in its load-bearing capacity, the name "Kettenbrücke" lived on in the replacement bridge until it was demolished in 2020 due to defects. Back in 2009, the building owners, the canton of Aargau and the city of Aarau, launched a project competition in which the Pont Neuf project was chosen as the winner by the jury.

Under the management of INGE Pont Neuf, ARGE Kettenbrücke, consisting of Implenia, Rothpletz, Lienhard + Cie AG | Bauingenieure & Bauunternehmung and Meier+Jäggi AG Zofingen, was commissioned to build the temporary auxiliary bridge to ensure the flow of traffic and to realise the new Pont Neuf replacement structure.

Implenia bridge construction specialist Antonio La Cola is delighted to be part of the project: "This structure is something special even for me after 21 years in bridge construction. When building a bridge, the focus is usually on functional properties. Here, with the arch bridge in Aarau, expertise in demanding concrete work is also required." Implenia Construction Manager Dominik Sieber explains further: "The very complex geometry of the structure, coupled with high aesthetic demands on the exposed concrete surface made of pigmented special concrete, is not an everyday occurrence. And in addition to technically demanding construction methods such as special civil engineering in flowing water or demolition work in hard-to-reach places, we are in the middle of an inner-city area."

During a visit to the site, CFO Stefan Baumgaertner also took a look and was impressed by the new arch bridge and how the team accepts and masters the challenge. However, not only the bridge itself, but also the riverside passages are to be upgraded with walking and meeting zones for the people of Aarau by the end of construction in 2023 and, together with the new arch bridge, will complement the cityscape of Aarau.
More about the Pont Neuf project

Reopening of the first Reka vacation village in Lugano

Vernissage "Touch Wood" - Wood as a building material in transition