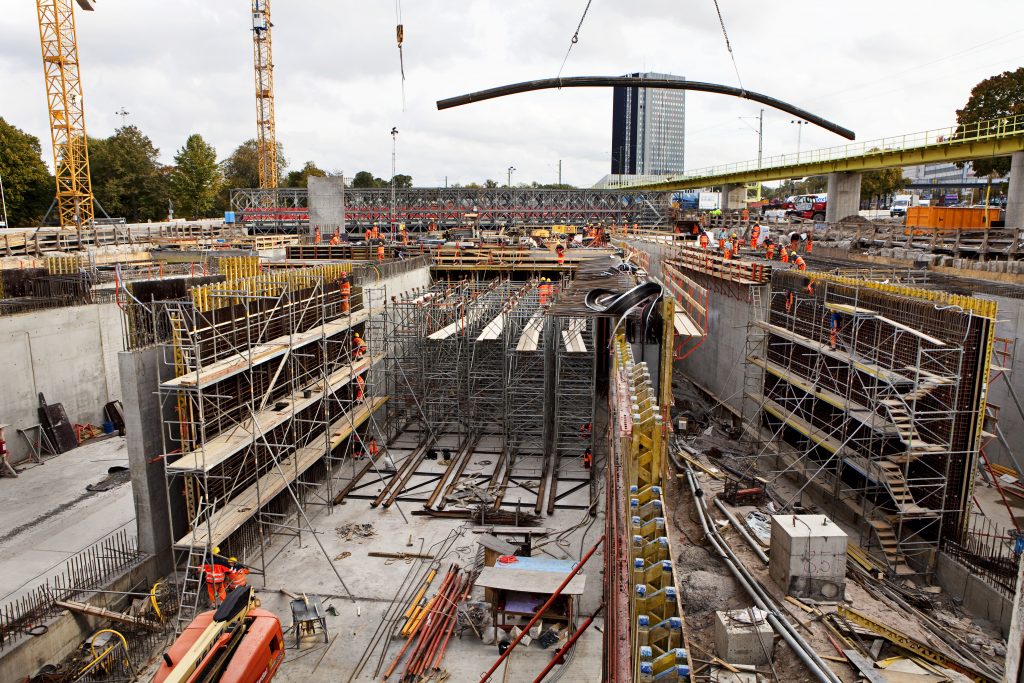 The design was carried out by Technisches Büro, Implenia's, then Bilfinger's, in-house Structural Design department.

Stage Norra Länken 12 at Norrtull is part of the Norra Länken in Stockholm and we together with Peab carried out the project in a consortium as a general contractor with responsibility for both design and construction. The design contract amounted to approximately SEK 20 million.

Stage NL12 is a cut and cover tunnel with two concrete tunnels accommodating 3+3 lanes of the E20. The total length is 350 metres. On top of the tunnels, a circulation area and a temporary and a permanent steel railway bridge (> 400 m) were built. NL12 was one of the most challenging sub-projects of the whole Northern Link due to the difficult geotechnical conditions and the heavy traffic of about 120,000 vehicles/day. The support structure consisted of secant piles anchored backwards using MAI anchors and an underwater concrete slab anchored in rock. Extensive noise abatement measures were carried out during the foundation works with piling and excavation. The geographical location of the project in the inner city of Stockholm placed high demands on the noise level and timing of the noise abatement works.

Stage NL22 at Bellevue Park is part of the Norra Länken in Stockholm. Implenia Sweden, then Bilfinger Berger, was awarded the project in early 2010 for a sum of SEK 320 million. It is a cut-and-cover tunnel with a total length of 220 m plus 40 m of tunnelling in rock. This part of the Northern Link project goes through a very sensitive area (part of a national park). In addition to the national park, the project was also located directly adjacent to a busy railway environment in the form of the Värtabanan. The Värtabanan was used daily by freight trains up to 500 metres long. Work on and around the railway facility needed to be carried out so that train traffic could continue without disruption. The supporting structure consisted of excavated piles anchored backwards and with a partially internal pile. Subsequently, underwater concrete was poured in order to drain the pit. The tunnel section was cast with a base slab and the wall and roof were cast separately. The concrete tunnel section connects to the rock to the east and to the existing tunnel (NL12) to the west.