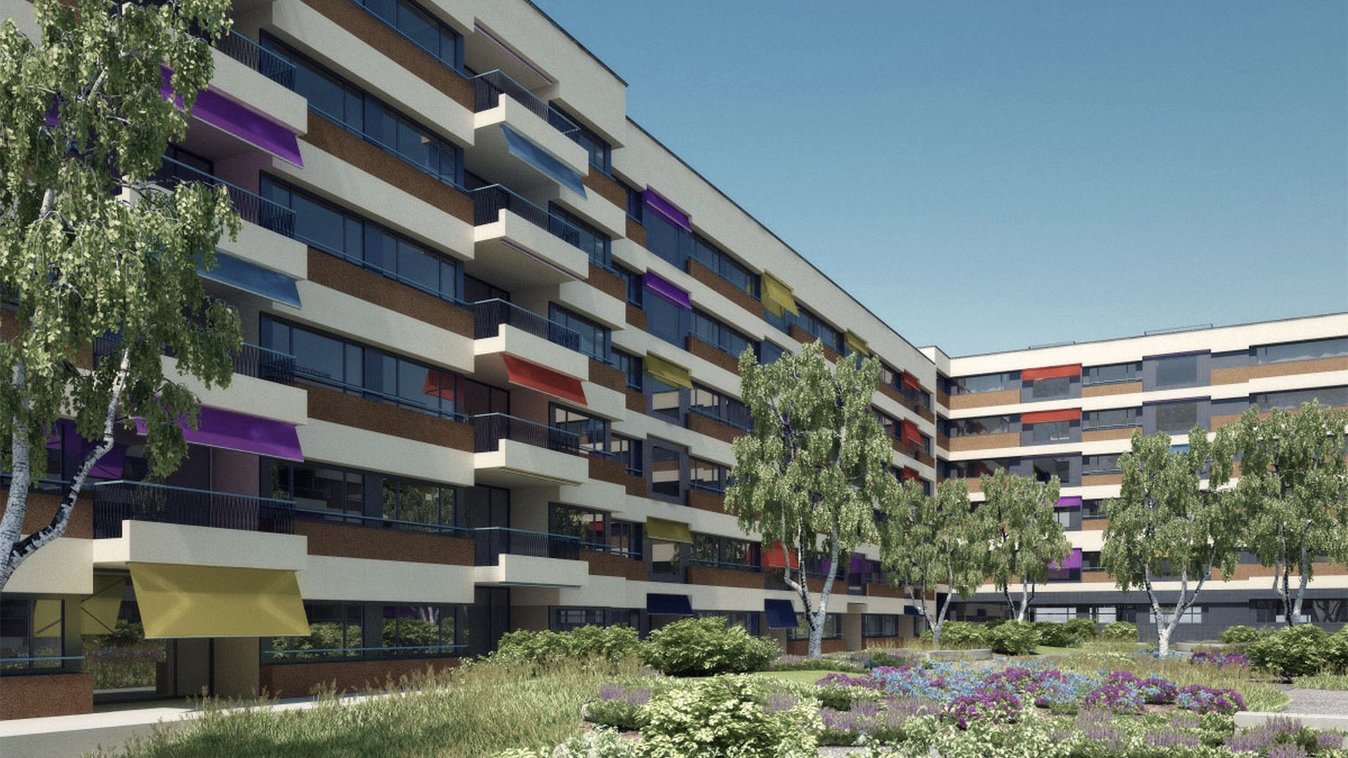 One of the most attractive residential areas in Dübendorf is being built in idyllic surroundings on the bank of the River Glatt. Featuring architecture that is sophisticated yet down to earth, the Im Giessen district forms an inviting gateway to Dübendorf.

The district is being built on a section of the current Givaudan industrial site which is no longer needed. Located between Dübendorf city centre and Überlandstrasse, it successfully combines tranquillity and activity, old and new, a village community and exciting city life. The spacious public Giessenplatz square and adjoining garden on the bank of the River Glatt offer the ideal location for meeting friends and invite passers-by to linger. Both citizens of Dübendorf and people moving to the area will feel at home here.

The lively spirit of the location between the river, city and industrial landscape has also been incorporated into the architectural and open space design. It is expressed in the variety of shapes, the artistic design elements and the materials inspired by the surrounding area. There is also a subtle nod to the location’s history.

By 2020, around 300 primarily mid-range rental apartments, as well as homes for assisted living in old age, will have been built in the In Giessen district. Once all phases are complete, there will be roughly 350 homes in the area in total.

The development plans for the In Giessen district were prepared in close collaboration with the building owner Credit Suisse Real Estate Fund Siat, a real estate fund of Credit Suisse AG, and the Dübendorf authorities. They are subject to the special building regulations for the Giessen area approved by the Cantonal Council in 1997. These include requirements such as maintaining the district’s connection to the bank of the River Glatt and building a high-quality public space to spend time in.

In March 2014, the architects from atelier ww presented their master plan for developing the site. A study contract was issued to seven architectural firms to develop an attractive, high-quality plan for Giessenhof. The project by A.D.P. Walter Ramseier Partner AG, working together with landscape architects vetschpartner, met the requirements in terms of urban development, aesthetics, profitability, sustainability and comfortable living to a large extent and won the contract. atelier ww is responsible for the architecture of the Giessenturm tower.

The project was planned using sustainable spatial development methods. The City of Dübendorf’s development objectives – to upgrade the River Glatt area, ensure compact development and create homes for a demographic mix and for living in old age – were incorporated into the master plan and competition aims in the form of specific requirements for the future site atmosphere.

The district is being built in three phases. The first phase is the construction of Giessenhof (September 2016 to autumn 2018). In the second phase, the Giessenturm tower will be built (scheduled for late 2017 to the end of 2020). Finally, the third planning phase includes three further buildings on the site (execution scheduled from 2019).