Dietlikon, 31st January 2012 – The Infra-Prize is awarded every year by the Infra Professional Association (Fachverband Infra) to companies or to individuals who champion a good image of infrastructure works among the public and whose projects are of an exemplary character. With the project for the underground construction of the Lucerne central railway line, Implenia – together with the engineering partnership Emch+Berger WSB AG and IUB AG – developed an innovative solution dealing with the tricky groundwater situation and provided a saving of one year of construction time. The top-down method under pressurised conditions placed the greatest requirements on all the companies involved in terms of structural and civil engineering and proves that the Swiss pioneering spirit in construction is still alive today.
Implenia also contributed to environmental protection by using a fish pond as a sedimentation basin for groundwater and construction water; more than 2500 trout thrived splendidly in this pond and it was possible to release fish measuring up to 50 centimetres in length into the Reuss on completion of building work.
Finally, Implenia also won over the technical jury with its sympathetic reception of about 12,000 visitors on the day of the open tunnel portals and also with the co-organisation and provision of the tunnel for about 9,000 runners in the Lucerne Marathon.
The prize is proof for Implenia that the Swiss pioneering spirit is worth keeping alive even today and that the constant commitment to the topic of sustainability has great potential and means the future of the environment, the population and the company too. 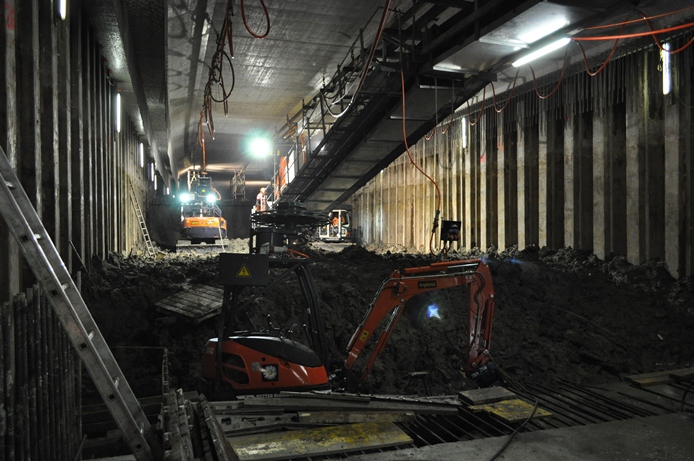 Underground construction of the Lucerne central rail line: the top-down method under pressurised conditions used for the first time in Switzerland had two distinct advantages. Firstly, the groundwater was spared and, secondly, the carcass construction was completed one year earlier than planned.

Implenia is Switzerland’s leading building and building services company. Having been formed from the merger of Zschokke and Batigroup, Implenia can look back at a building tradition stretching over 140 years. Implenia brings together under one roof the expertise from highly qualified group divisions of Real Estate, Building Infrastructure and Industrial Construction to make it into a company involved at the national and international level. Given its integrated business model and its specialists employed in all company divisions, Implenia is able to look after a structure throughout its entire life cycle – economically, sustainably, in an integrated and customer oriented manner. Implenia has its head office in Dietlikon near Zurich, employs 5424 staff and achieved a turnover of CHF 2.4 billion in 2010. The company is quoted on the SIX, the Swiss stock exchange (IMPN, CH0023868554). More information under www.implenia.com.