Semmering Base Tunnel (Lot 2.1): celebration to mark start of work on the tunnel shafts

Official launch of one of the largest and most demanding infrastructure projects in Europe | Implenia also working for the ÖBB (Austrian Federal Railways) on Semmering Lot 1.1 and the Granitztal tunnels

Dietlikon, 23 July 2015 – The two shafts that will allow tunnelling to proceed towards Gloggnitz and Mürzzuschlag are now being built at Lot 2.1 of the Semmering Base Tunnel in Fröschnitzgraben, Austria. Federal Minister Alois Stöger, State Governor Michael Schickhofer, State Councillor Karl Wilfing, CEO of ÖBB-Holding AG Christian Kern and, representing the construction consortium, the Head of Implenia's Business Unit Infrastructure Rene Kotacka today celebrated the start of work on the shafts with invited guests. After an ecumenical blessing, tunnel "godmother" Elisabeth Schoggl delivered the traditional greeting to the assembled tunnellers and guests: "I have the greatest respect for the workers at the rock face who little by little are completing a truly monumental project. I wish the tunnellers and everyone involved all the very best for a successful, and above all safe, endeavour."

ÖBB-Infrastruktur AG has commissioned the Fröschnitzgraben Tunnel Consortium to handle Lot 2.1. Implenia and Swietelsky Tunnelbau GmbH each have a 50 percent stake in the consortium, with Implenia taking the technical lead. The section of around 4 kilometres in the direction of Mürzzuschlag will be built using diggers and explosives, while the 9 kilometre section towards Gloggnitz will be drilled by two tunnel boring machines. The tunnelling from Fröschnitzgraben can only start after two 400 metre shafts are sunk into the mountain. These will be almost the size of the Empire State Building and will later serve as ventilation shafts for the emergency stop. Construction of the actual tunnel bores will begin at the foot of the shafts in 2017. In his speech René Kotacka, Head of Implenia's Business Unit Infrastructure, said how pleased he was that Implenia would be contributing its engineering and project management expertise. He also said that the Semmering Base Tunnel was one of the "largest and most technically demanding projects in Europe". He hoped that the next 10 years of construction work would go well and, above all, safely. He thanked the 400 or so workers who would ultimately be making the project a reality.

For geological and logistical reasons, the Semmering Base Tunnel is divided into three sections. In addition to Lot 2.1, a consortium in which Implenia has a 40% stake was recently awarded the contract for Lot 1.1. Implenia is also helping to build the Granitztal tunnels between St. Andrä and Aich on behalf of ÖBB Infrastruktur. 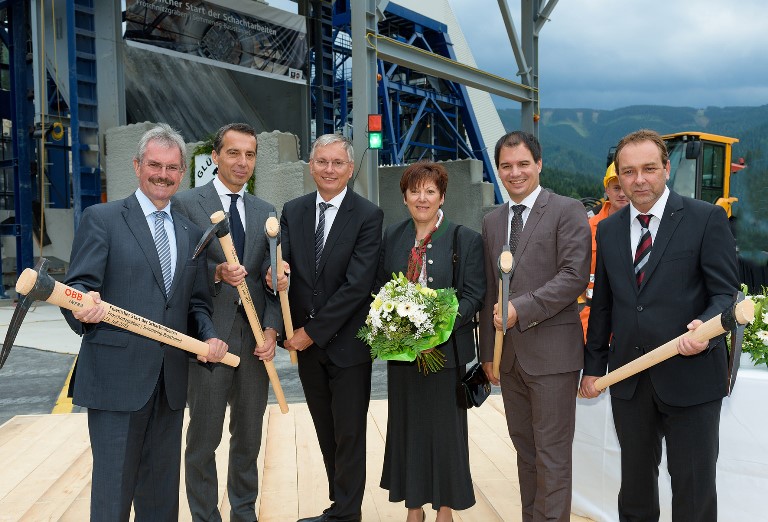 The Semmering Base Tunnel is one of the largest and most demanding European infrastructure projects. (Source: ÖBB)

Implenia, Switzerland's leading construction and construction services company, also has a strong position in the German, Austrian and Scandinavian infrastructure markets. Established in 2006, Implenia can look back on around 150 years of construction tradition. It brings together the expertise of its highly skilled sectoral and regional units under the single roof of a company active throughout Europe. With its integrated business model and specialists operating in all areas of construction, the Group can manage a building project through its entire lifecycle and deliver work that is economical, integrated and customer-centric. The focus is on striking a sustainable balance between financial success and social and environmental responsibility.

Implenia has its headquarters in Dietlikon near Zurich and employs approximately 8500 people around Europe. In 2014 it posted pro forma turnover (including the former Bilfinger Construction GmbH) of around CHF 3.6 billion. The company is listed on the SIX Swiss Exchange (IMPN, CH0023868554). For more information, please visit www.implenia.com.

Implenia wins large tunnelling project in France: Lot 3 of the Lyon-Turin base tunnel