Wendlingen am Neckar (DE), 29 October 2019 – Implenia has been commissioned by Deutsche Bahn to build the 8-kilometre Albvorland Tunnel, a key section of the new 60-kilometre-long railway line between Stuttgart and Ulm. Today’s breakthrough in the southern tube by tunnel boring machine (TBM) WANDA marked the successful end of Implenia’s drilling work on the Albvorland Tunnel’s two tubes. TBM Sybille already made the breakthrough in the northern tube in August 2019.

Prior to its re-emergence into the daylight at today’s ceremony, WANDA, which is 137 metres long and weighs 2,300 tonnes, had been digging underground for almost exactly two years. During this period, Implenia installed a total of 3,989 tubbing rings as the TBM’s progressed 15 metres a day on average, and 32 metres at the very peak. Implenia made these concrete tubbing sections in advance at a factory set up especially for the project close to the construction site.

The successful breakthrough in the two tunnel tubes brings an end to mechanical drilling at the last major tunnel on the new Stuttgart–Ulm line. “We at Implenia are proud that today we have completed the excavation of one of the ten longest railway tunnels in Germany. We would like to congratulate our miners and thank Deutsche Bahn for trusting in our tunnelling expertise,” says Erwin Scherer, Global Head Tunnelling at Implenia.

“The Albvorland tunnel is a significant structure on the new high-speed Wendlingen-Ulm line,” explains Thorsten Krenz, Deutsche Bahn AG’s Group Representative for Baden-Württemberg. “Together with Stuttgart 21, the infrastructure, which is designed for speeds of 250 km/h, will make for faster travel not only within Baden-Württemberg, but across Europe. The rail journey between Stuttgart and Ulm will be almost halved to around half an hour. Today, with the near completion of tunnel boring for the new Wendlingen-Ulm line, we have moved a large step closer to this goal. Approximately 61 kilometres of tunnel have been successfully dug under often-difficult geological conditions. I would like to thank the tunnellers and engineers for the hard and valuable work they have done for our future.”

In addition to the Albvorland Tunnel, Implenia is in charge of building the link to the Stuttgart-Tübingen line, the “Kleine Wendlinger Kurve”, and the GZA freight train link, which includes the 170-metre, single-track tunnel at the western portal of the Albvorland Tunnel in Wendlingen. “We’re pleased to be able to bring more good news with this part of the order. After seven months of drilling, we have made the crown breakthrough in the GZA construction project,” says Erwin Scherer, Global Head Tunnelling at Implenia. This work here is divided into the crown excavation and invert excavation. The crown work is more difficult, more sensitive to subsidence and more time-consuming. The invert excavation should be finished by the end of 2019, after which the inner skin will be made using in-situ concrete. 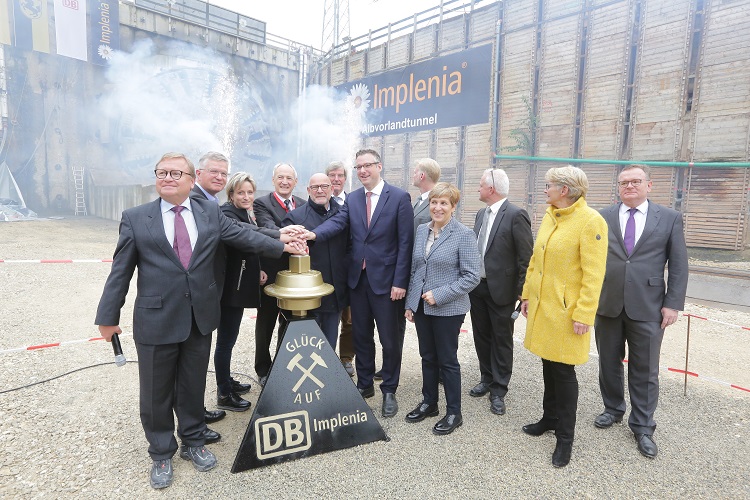 Numerous guests of honour came to Wendlingen today to celebrate the successful breakthrough at the southern tube of the Albvorland Tunnel by Implenia-controlled tunnel boring machine WANDA. (Photo: ©Jürgen Stresius)

Implenia is Switzerland’s leading construction and construction services company. It also has strong positions in the German, French, Austrian, Swedish and Norwegian infrastructure markets, as well as significant building construction and civil engineering operations in Germany and Austria. Established in 2006, Implenia can look back on around 150 years of construction tradition. It brings the expertise of its highly skilled construction units together under the roof of a company active throughout Europe. With the broad offering of Implenia and the deep experience of its specialists, the Group can manage a building project through its entire lifecycle and deliver work that is economical, integrated and customer-centric. The focus is on striking a sustainable balance between financial success and social and environmental responsibility. Implenia, with its headquarters in Dietlikon near Zurich, employs more than 10,000 people in Europe and posted revenue of around CHF 4.4 billion in 2018. The company is listed on the SIX Swiss Exchange (IMPN, CH0023868554). More information can be found at www.implenia.com.