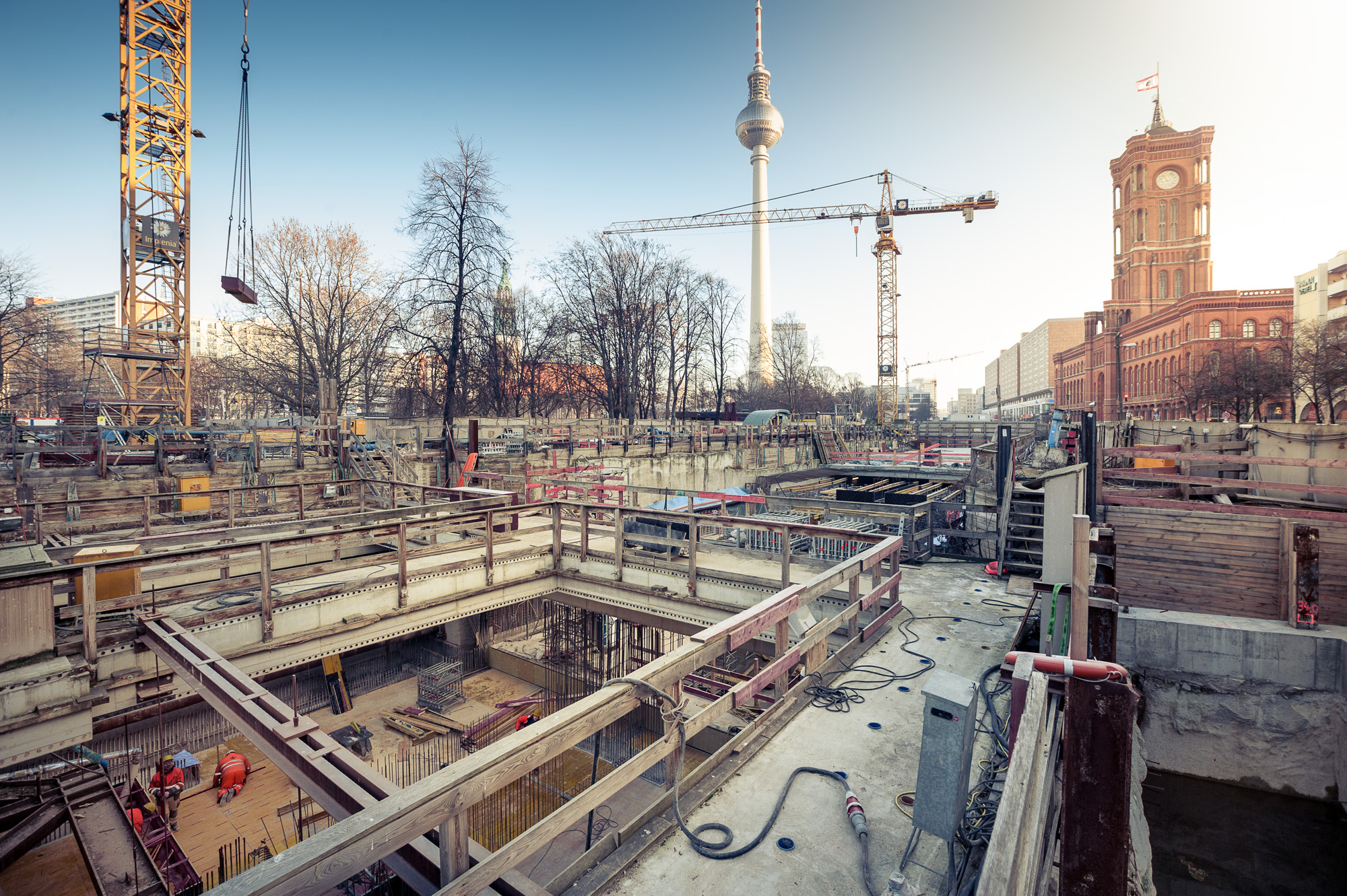 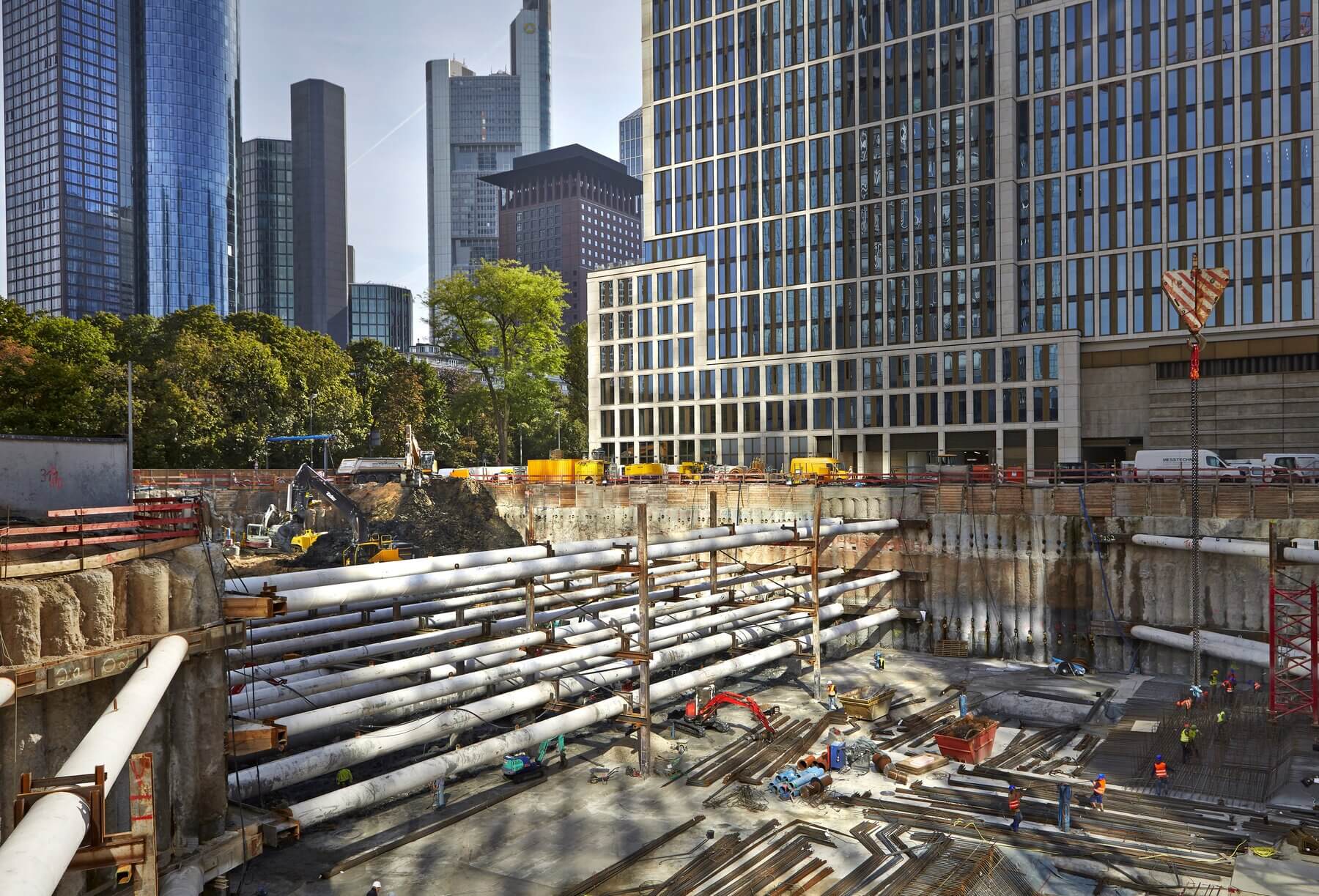 In the heart of Mainhatten

Between November 2015 and November 2016, the joint venture Implenia Spezialtiefbau GmbH / Robert Zeller GmbH & Co.KG constructed the Marieninsel excavation pit. The dewatering was shut down in June 2017.

The project is located on the edge of Frankfurt's banking district and comprises the two sub-projects Marienforum and Marienturm. The client of the project is Pecan Development GmbH. The Marienforum is an approximately 40m high, flat-founded building. In addition to office space, the building will house 2 restaurants.

The sister building Marieninsel, which currently holds 13th place in the high-rise ranking in Frankfurt am Main, will reach a height of 160m. It will be used primarily as an office building.

The load transfer of the high-rise tower is calculated as a combined pile and slab foundation (CPP), an essential part of which are 61 large drilled piles with a diameter of 1,500 mm. Due to the construction process, the foundation piles had to be drilled from the top edge of the ground, resulting in drilling depths of up to 62 m. The foundation piles were drilled with water ballast. The construction was carried out with water loading, including the corresponding treatment and desanding of the process water. 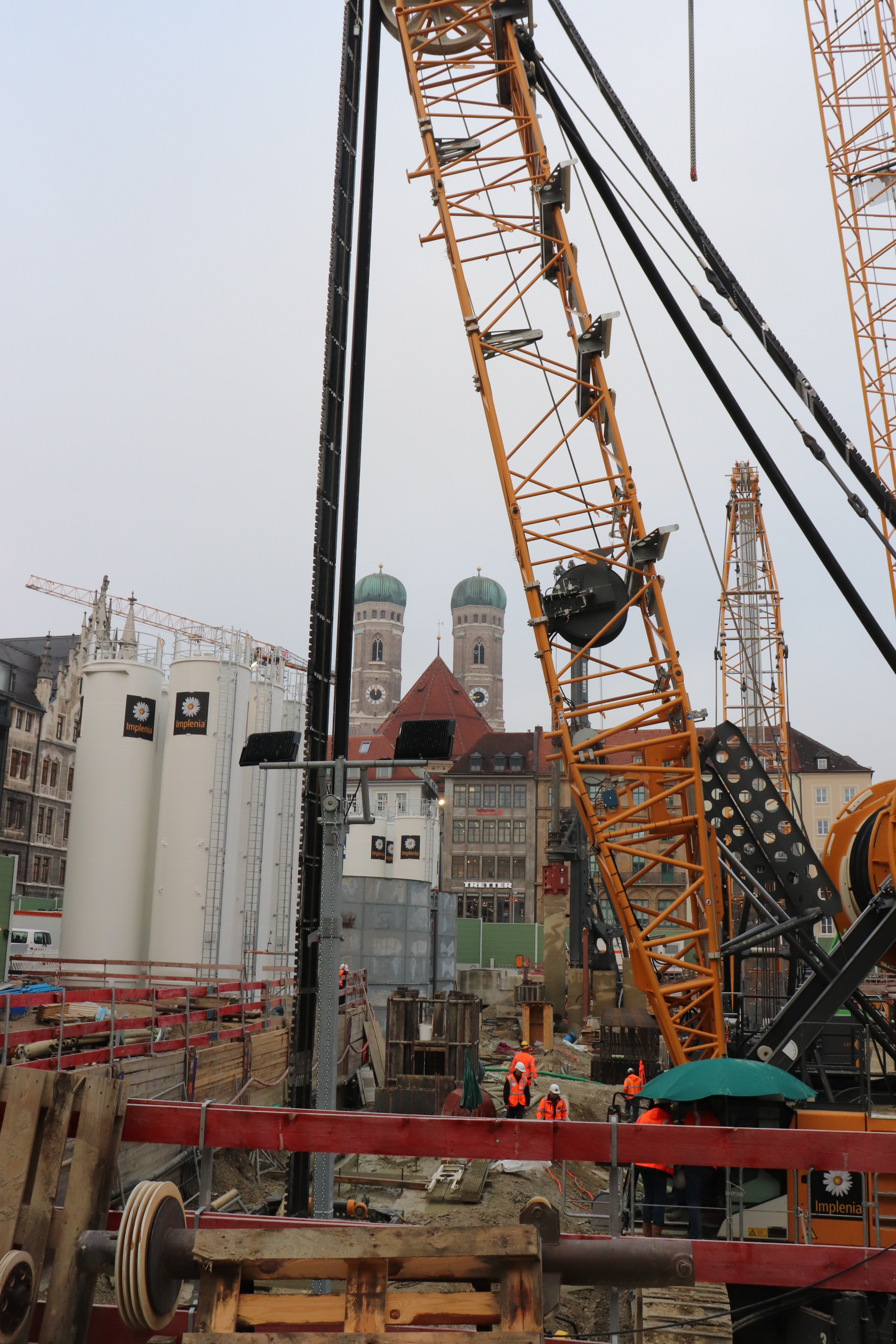 The large-scale 2nd Munich S-Bahn main line project consists of the sub-measures "inner-city area/tunnel" and "network supplementary measures" in the outer branches.
outer branches.
In the course of the Marienhof construction measure, the central access structure in
diaphragm wall and cover construction. The advance excavation level at approx. 3m below ground level with anchored soldier pile shoring as excavation support will be constructed in advance. From this level, the diaphragm walls and the primary supports for the temporary load transfer of the floor slabs are constructed. After
After completion of the concreting of the barrier floor slab, the excavation of the individual levels begins continuously from top to bottom. Openings in the slabs remain in order to secure the supply and disposal.
Due to the existing buildings around the excavation pit, the platforms below will be excavated under compressed air. To secure the
extensive compensatory injection measures will be carried out to secure the surrounding buildings, divisions and underground railway structures. 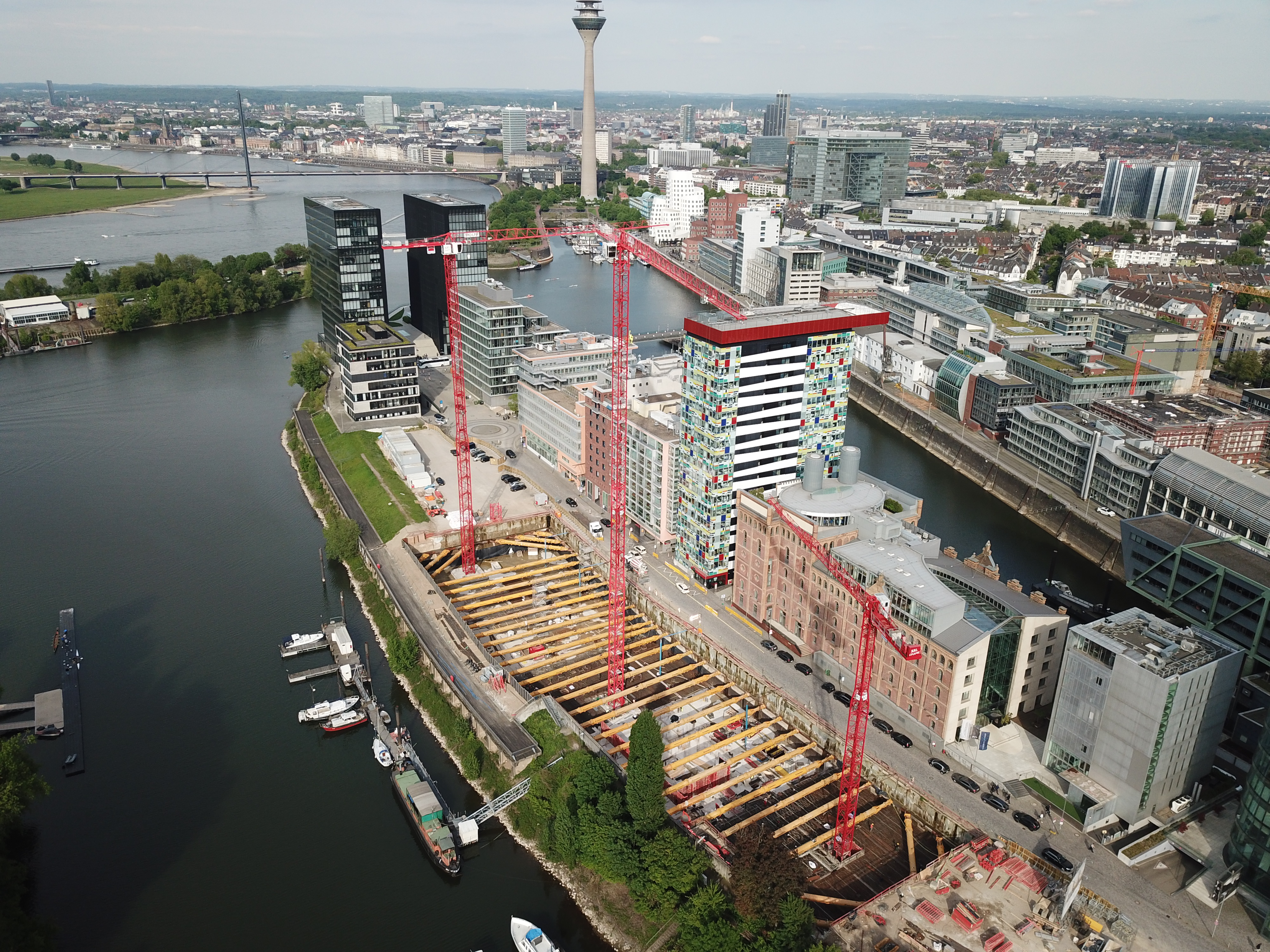 In the Düsseldorf Media Harbour 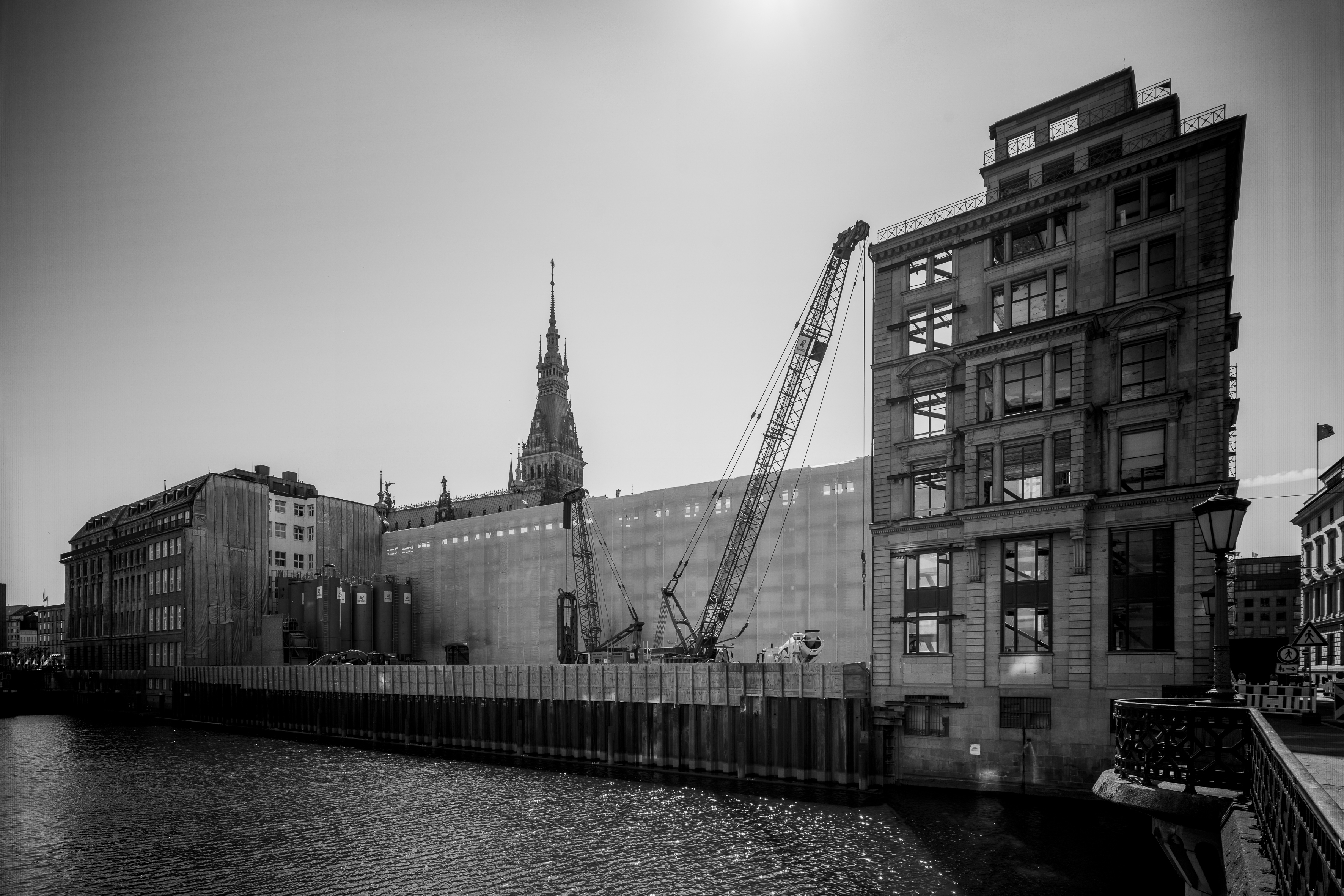 Behind the historic façades of the Alter Wall 2-32 ensemble, around 23,000 m² of modern office space and around 12,000 m² of high-quality retail space are to be created between Alsterfleet, City Hall, Rathausmarkt and the Chamber of Commerce.
A core refurbishment was carried out in houses no. 10 - 32, leaving only the listed facades facing the Alter Wall and Adolphsbrücke. In house 32, the part of the existing building required for the stability of the façades was initially retained. Subsequently, a 12-storey building ensemble was created here with 6 office, 3 retail and 4 parking storeys.

The property Alter Wall 2 - 8 was added to the list of listed buildings in 1983. The properties Alter Wall 10, 12, 20, 22 and 32 are listed as part of the ensemble Alter Wall 2 - 32, Rathausmarkt 2 as cultural monuments worthy of protection in the list of monuments. For buildings 10 - 32, a complete gutting and reconstruction behind the old facades was planned due to the poor structures and building fabric. In addition, the existing cubature of the staggered storeys was extended in parts (building 10 - 22). 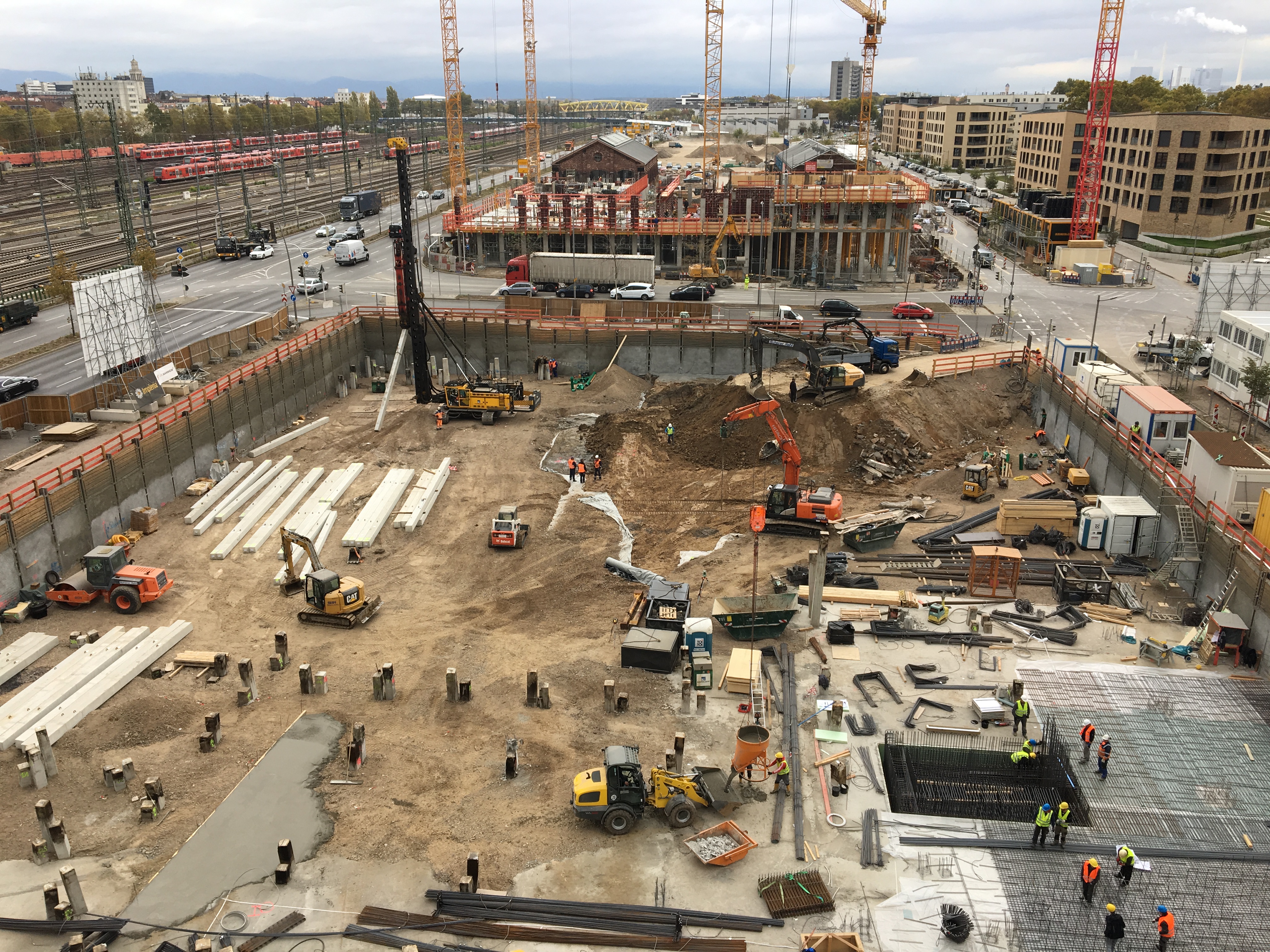 New construction of the TRM in the Glücksteinquartier

Construction of an excavation pit and driven pile foundation for the new building of the Technical Town Hall in Mannheim.

The enclosure of the excavation pit was carried out by means of a single-layer tie-back beam shoring with timber and shotcrete infill. The girders were inserted into the ground by means of a Kelly borehole after an explosive ordnance probe had been carried out. Subsequently, the space between the girders was filled with wooden planks down to a depth of 1.50 m below ground level. The area below the 1.50 m to excavation base (approx. 4.50 m below ground level) was secured with a shotcrete shell. The shoring was anchored back with a layer of grouted anchors, each with 2 to 4 strands.

The foundation for the later structure was made by means of 635 prefabricated reinforced concrete piles driven up to 18.00 m deep into the Mannheim subsoil. The majority of these piles were driven at an angle to form 3 and 4 pile trestles. Here, too, an explosive ordnance probe was first carried out. 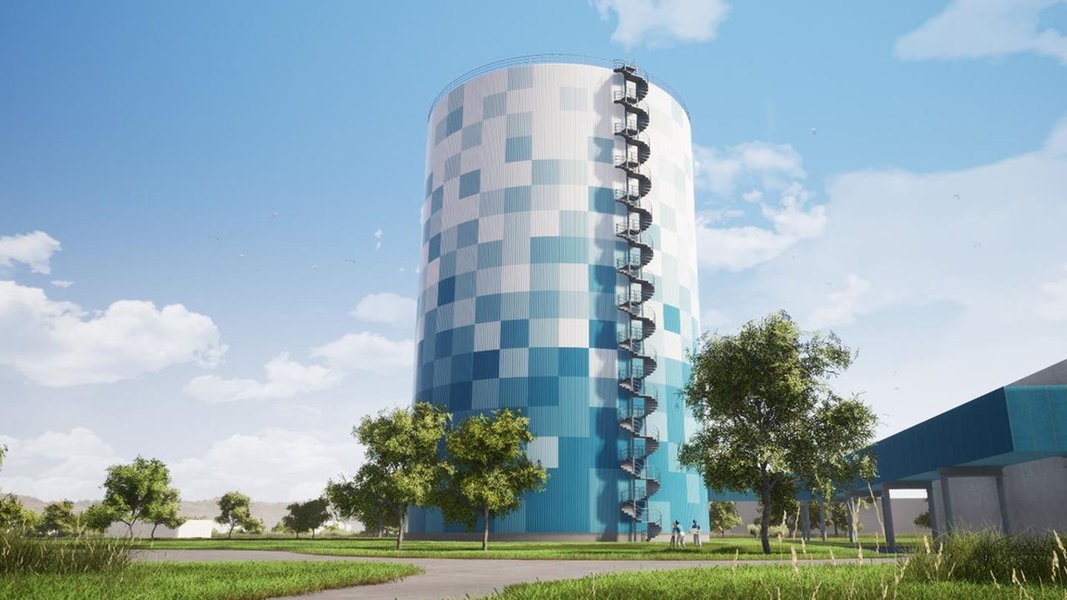 Stadtwerke Rostock commissioned our Erfurt office, based in Arnstadt, to build a 55 m high "thermos".
The water serves here as energy capacity so that the gas turbines used for energy conversion do not have to be shut down in the event of partial load cycles. The heated water can then be fed into a district heating network. Points awarded in the area of sustainability! 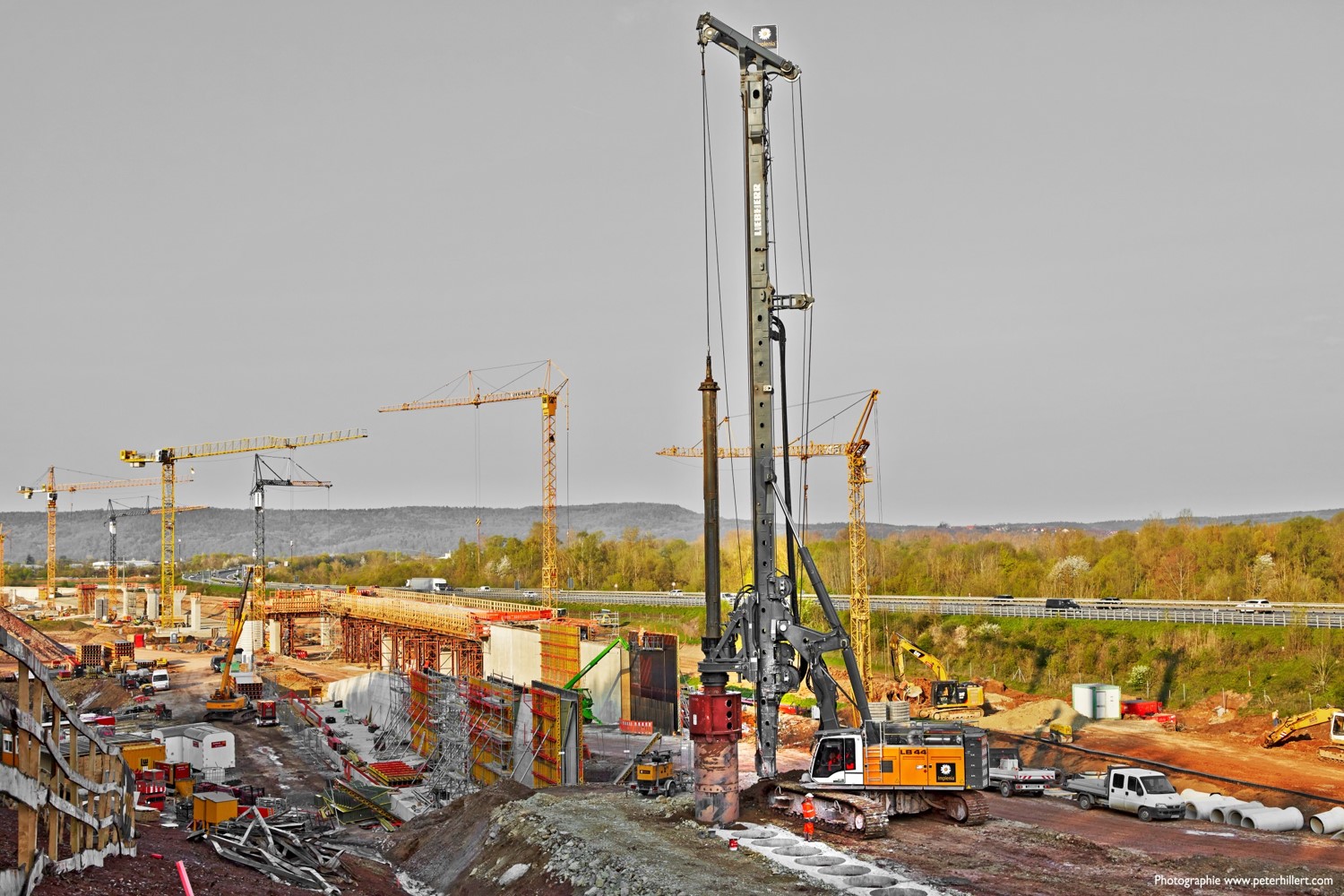 As part of the VDE 8 Munich - Berlin project 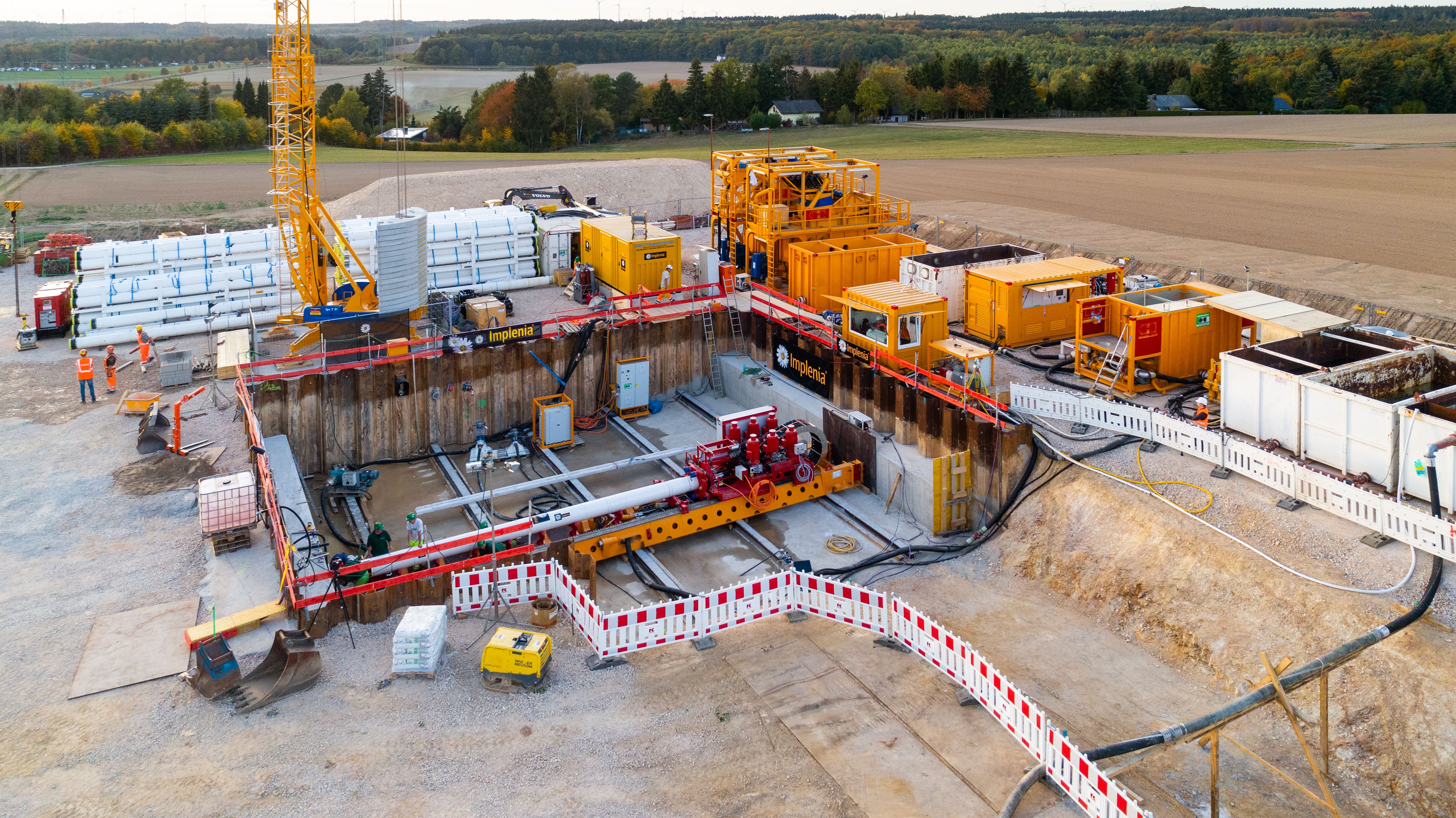 In the course of the energy turnaround, high-voltage power lines must be built in Germany.
be built in Germany to transport the regenerative wind energy from the wind farms to the
from the wind farms to the conurbations. Some of these are to be built as underground
underground cables. In the area of the Bacharach transformer station in Rhineland-Palatinate
Implenia is laying underground cables using the newly developed E-Power Pipe® process.
-method developed by the
Herrenknecht's newly developed E-Power Pipe® process. With a specially developed
tunnel boring machine with a bore diameter of 505 mm is used to bore six times
700 m in a curved drive. The method is to be used in future in
areas where, for example, open construction methods cannot be approved for environmental reasons.
open construction methods cannot be approved.